Through a Creative Renewal Grant from the Arts Council of Indianapolis, I was able to travel to the quaint village of Monteton, France in 2008 to attend the Dordogne Jazz Summer School (DJSS.)  I had two goals – to learn how to play jazz with a combo, and to learn how to write a jazz chart.  Every day, around 60 international students, ages 15-82, studied, rehearsed and performed together.  Every night, I was back in a practice room, writing, erasing, and attempting to come up with something new and different.  I managed to finish “Midnight in Monteton” in time for the big Friday night performance.  It was exciting to find a new medium to write in, a new set of toys to experiment with.  Definitely a new set of challenges.  Returning home, with the memories fresh in my mind, I made a goal of writing one jazz piece per month.

Not only did I fall in love with Monteton (or maybe because I fell in love with Monteton) I had the opportunity to be part of DJSS again and again.  In 2009, 2010 and 2011, I returned as Composer-in-Residence, bringing eleven new tunes with me each time to present at the school.  (I know that there are 12 months in a year, but I needed that last month to pack. . .)

I started compiling each set of tunes into songbooks, one for each year of writing.  Included are parts for each instrument in a jazz combo (C, B flat, E flat and bass clef) and an optional bass line. 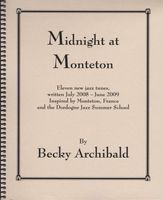 Run of the Mill

Get Over the Blues

I’ve Got Designs on You 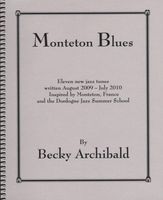 If You Only Knew

Twas in the Moon of Wintertime

Is This the Real Thing? 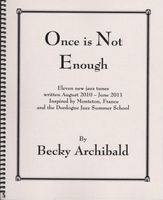 Once is Not Enough

And Then There Were Two